Well, 2014 was a pretty productive knitting year. I knit finished 44 projects and knit 15,167.6 yds. Not bad at all. One surprising thing is that only 14 of the projects were knit for me. I think that’s usually much higher, but I did have a brand-new nephew to knit for, so that may have been a factor.

As far as disappointments, I’m mostly disappointed in the two sweaters I knit, since neither fits the way I want them to. Luckily, they should be easy fixes; I just need to get motivated to rip them back and make the necessary adjustments. I can’t really complain about anything else.

And when it comes to things I’m pleased with, the list is pretty long, so I think I’ll just post pictures and links to their pages on Ravelry if anyone wants to read more. 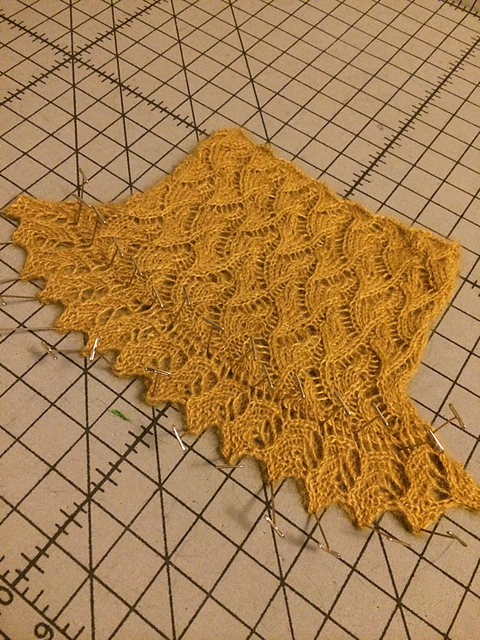 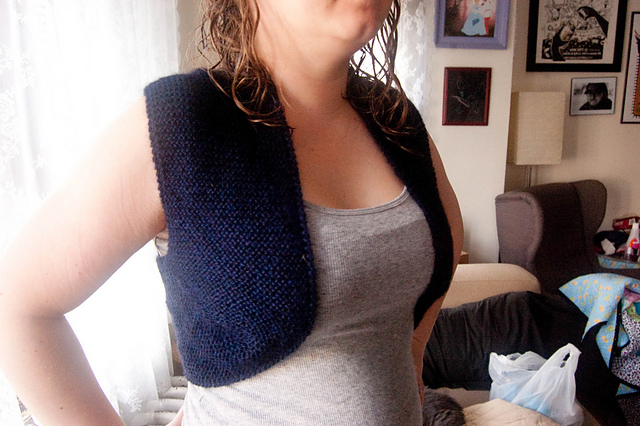 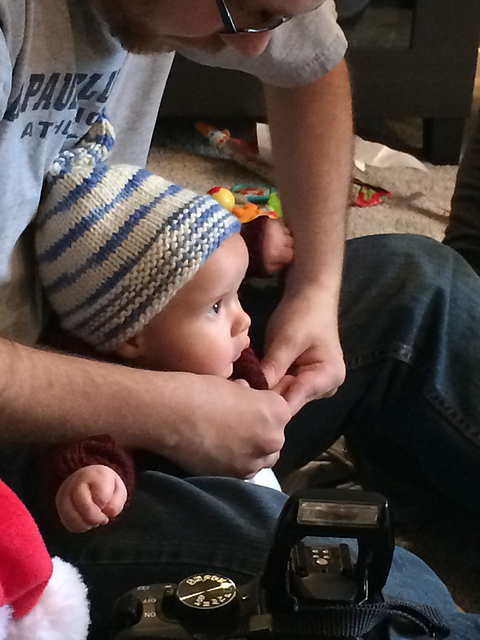 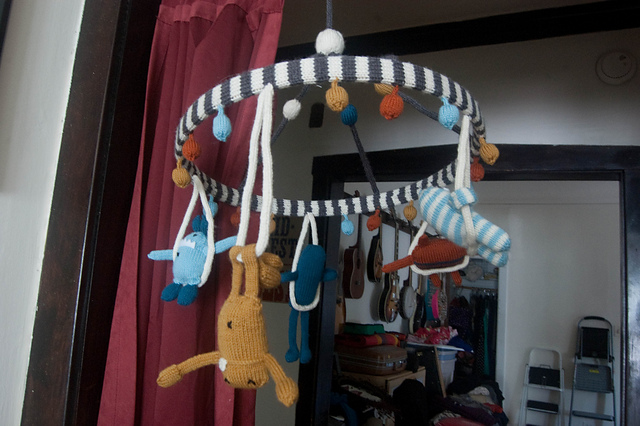 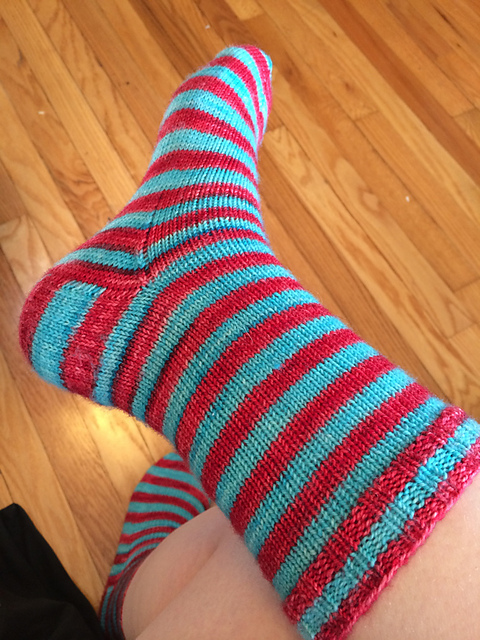 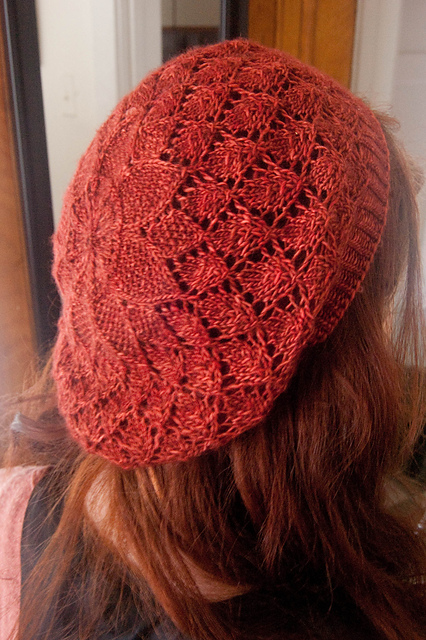 I’m not even going to post what my goals were because I haven’t spun at all.

On the knitting front, things went sort of OK. Maybe if I keep knitting sweaters I’ll eventually have better luck? I’m also pretty happy with getting my yarn buying under control.  Spinning and other types of crafting didn’t really happen. I think my plans for next year will be a little less extensive.

Well, I definitely haven’t done as well with yarn buying since my last update, but I’m kinda OK with that. I’m mostly just happy that I’m still knitting a lot and haven’t gone off the deep end buying yarn. Wish me luck at Stitches!

After going over my 2014 knitting plans, I finally cast on for a new sweater. I’ve been pretty gun shy about sweaters, since I don’t have any that I’ve knit and wear on a regular basis, so I decided to go ahead and make a CustomFit sweater. I swatched with two different yarns: Knit Picks Wool of the Andes Worsted in Chocolate (purchased in August 2007) and Valley Yarns Northampton in Fawn (purchased at Stitches Midwest, also in August 2007). These are definitely deep stash! They both worked up to 5 sts and 7 rows per inch, so I had CustomFit create a relaxed fit, V-neck cardigan for me. I chose the wrong sleeve option, so I had to go and figure out how to have them taper down, but it wasn’t too bad.

So far, I’ve knit both sleeves and the back. Oh, and run out of brown yarn. Ha! I ordered some more from Knit Picks two days ago, so the project is on hold until it gets here. It’ll be interesting to see how much, if any, difference there is between the dye lots. Wish me luck on that one. Here’s a crappy iPhone shot of the back.

Since I had to stop working on the sweater (just two fronts, button bands, and finishing to go!), I decided to ride out my sweater excitement by swatching with some of the (few) yarns that I have sweater quantities of in my stash. First up: Rowan Calmer in Garnet. I’m swatching on US 8s and 6s. After this swatch is done, I’ll be swatching some Berroco Ultra Alpaba in Peat Mix. Obviously, the Calmer is a better choice for a summer sweater, not to mention nicer to knit in hot weather, but we’ll see which one I end up wanting to cast on.

Swatches are definitely good bus knitting. The bottom section is on US 8s.

I’m not sure what either of these yarns will end up being, but I’m going to let gauge decide. I don’t think the Calmer is really my color (which is a bit redder/less pink than the picture), so we’ll see what I do about that. Maybe overdye with blue or purple?

I’ll be in the suburbs for most of this weekend, so I should figure out something to bring with me, since the yarn reinforcements won’t be in by then and I think I’ll be done swatching, too. Maybe socks? Probably socks.

I decided it was time to see how my plans for this year were going so far.

Not too bad. If I could make some specific plans for my UFOs, spinning/fiber, and sewing, I’d probably be able to get on track. Luckily, I’ve been knitting up a storm (and not buying much), so that is going really well. Hurrah!

This week’s tea is Stash Strawberry Pomegranate Herbal Red Tea. It contains rooibos, rosehips, hibiscus flowers, raspberry leaves, citric acid (ha), strawberry flavor, and pomegranate flavor. Rooibos, rosehips, and hibiscus flowers are some of my favorite things to have in a tea. Rooibos is just so smooth. I adore it. This tea tastes mostly of the rooibos, with a bit of fruitiness in the background. Nothing spectacular, but I bet it would make a really nice iced tea.

I also tossed in a bit of Fusion Sweets Strawberry Sugar (sugar, dried strawberries) to keep it a more sugary edge. I really like their sugars (I got a sampler a while back.), especially when added to tea. And yes, I do realize that the owl mug is terrifying. I got it as a gift, but its eyes are pretty creepy. The good thing is that it’s a huge mug, so it’s good for a giant beverage or having soup.

Tonight, I’m drinking Magnificent ChamoMile by Adagio. Adagio is one of my favorite tea companies because of the variety and all of the information about tea on the site. This particular tea is from the Chicago Series and contains chamomile, white tea, apples, hibiscus flowers, orange peel, grapefruit flavor, cornflowers, and rose petals.

It mostly tastes of chamomile, which is probably my single favorite ingredient in any tea. It’s a sweet chamomile with a hint of white tea. The other ingredients don’t add much, but I’m a fan of a good, solid chamomile anyway, so this is fine with me. Adding a little peppermint it might be nice or maybe even a fruity rooibos.

The kitten tea cup came with a saucer, lid, and infuser. It was another Christmas 2012 gift from my grandmother. Apparently, I got a lot of tea stuff that year. It’s my favorite cup to use when I’m having some tea on my own.

I’ve decided I want to take some time to slow down and do something deliberate at least once a week. I’m blatantly stealing Milkyboots’ weekly cheese ritual, but doing a weekly tea ritual instead.

I’m using a fancypants tea cup and saucer covered in violets that my grandmother bought me during Christmas 2012, along with a little teapot that I think my mom got me a while ago. I don’t normally use a teapot, but I wanted to have a couple of cups of this tea. The coasters are from a set of Walt Disney’s Enchanted Tiki Room coasters Dalice and I got in Disney World in 2013.

I knit 40 projects (and one substantial swatch) and I’m pretty pleased with that. Half for me and half for other people. Here we go!

It looks like 2014 is off to a pretty good start, with one FO so far, a blanket over half-done, and a pair of socks started. I also have the first Nelkin M Club project (Magpie) on the needles and will be starting Ysolda Teague’s mystery shawl KAL this week. I have a few UFOs, too, but they are all pretty small and I can pick them up between other projects. I can’t wait to see what I knit this year.

Inspired by a few knitting friends, I’m going to lay out my plans for 2014.

Since this summer will be my 10th knitting anniversary, I want to make sure I push myself a bit more this year instead of just doing relatively simple projects that don’t require much attention to sizing. Hopefully, my knitting goals sort of bear that out.

Ah! So many things I want to do! Luckily, they’re mostly continuing good habits or trying to establish new ones. I have an entire year ahead of me, so I can get a ton accomplished.